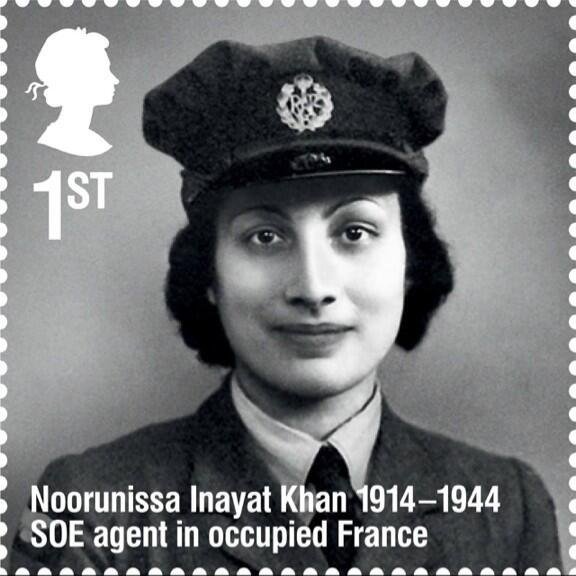 Noorunissa Inayat Khan (1914-1944) was one of the silent heroes of the Second World War.

When the war broke out in 1939, Noor and her brother Vilayat left for Britain to join the war effort.  Although they were Sufis and believed in non-violence, they decided that it was criminal to stand by and watch the treatment of Jews by the Nazis.

She worked as a wireless officer for the British Special Operations Executive in Paris during 1943 (she had escaped to Britain after the fall of France in 1940).  She evaded capture by the Nazis and continued to send important messages to London for far longer than expected.  She was betrayed, arrested and interrogated, but refused to give up secrets.  She was executed at Dachau in September 1944.

Born in Moscow to a Sufi teacher and an American mother, and descended from the 18th century Tipu Sultan of Mysore, Khan was educated in Paris.  She was posthumously awarded the French Croix de Guerre and was one of only three women to receive the British George Cross for service during the Second World War.  A memorial to her in Gordon Square Gardens, London, was unveiled by the Princess Royal in 2012.

She is known in France as Madeleine of the Resistance (against Hitler’s occupation forces).  A leafy square in Surenses, where her father Hazrat Inayat Khan moved into the large house gifted by a Sufi benefactor in 1920, is named after her.  The French government has put up a plaque outside the house in her memory and every year on Bastille Day, a band plays outside Fazal Mazil, or House of Blessing.

A Mad Man With A Blog