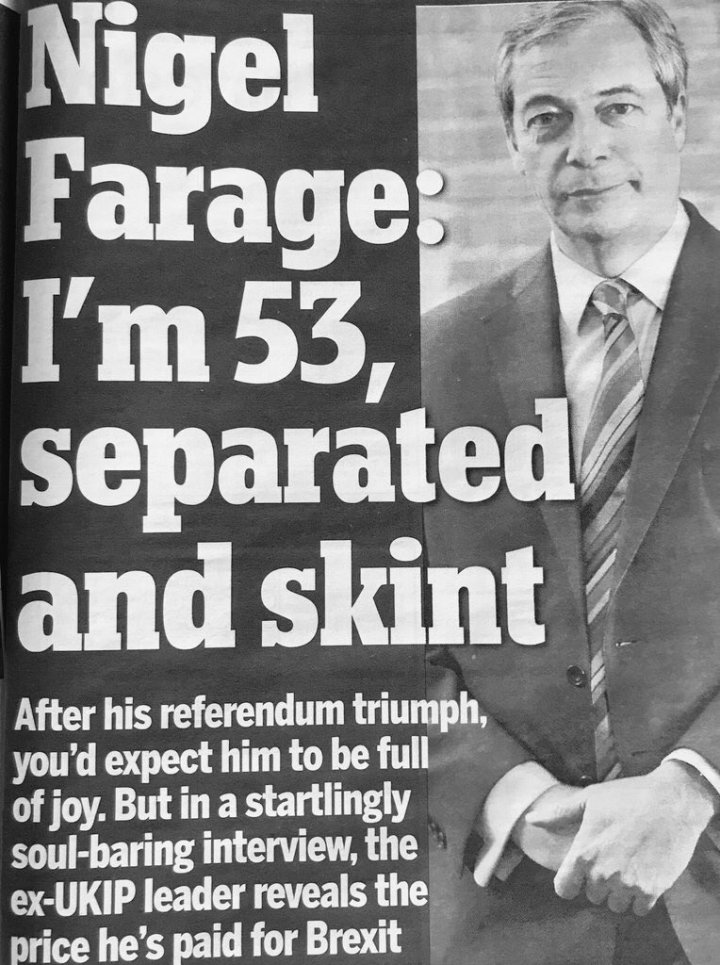 Nigel Farage, the former leader of Ukip, has bemoaned being “53, separated and skint” in an interview, adding “there’s no money in politics” …

Labour announced, during the run up to the 2017 General Election, that it planned to levy VAT on private school fees to fund a policy of universal free school meals.

Cue shouts, of “Jeremy!  Jeremy!” as the Cult of Kyle, sorry, Corbyn screams hate at pictures of Emmanuel Goldstein, sorry, got carried away there, pictures of people who send their offspring to private school.  People like Shami Chakrabarti, the uber Corbyn loyalist and all around good egg, who is sending her son to private school.  Why I wonder did screaming at a chap with a Jewish name come to mind in connection with Momentum?

Here’s what Shami Chakrabarti had to say on Peston about sending her son to an £18,000 private school while criticising selective education.

Any way, Ms Chakrabarti on failing to get her son into Eton, David Cameron’s alma mater, managed to wangle him a place at Dulwich College, Nigel Farage’s old school.  Confusingly, for the most ardent admirers of Nigel’s straight talking, chap down the pub persona, Dulwich is not a College of Further Education.

Dulwich is a prestigious private school, founded in 1619 whose motto is Detur Gloria Soli Deo, “Let glory be given to God alone”.  I fear Nigel experienced a bit too much in the way of confidence building there.

Incidentally, Jeremy Corbyn did not go to just any old grammar school, but Adams’ Grammar School, established in 1656 by William Adams.  Adams was a wealthy member of the Worshipful Company of Haberdashers (one of the Great Twelve Livery Companies of the City of London).  Both Adams and Dulwich style themselves on the public school model and like Eton, they are also all boys schools.

I leave you to reflect, dear reader, on the connection between casual misogyny, picked up in one’s formative years in an almost all male environment, and the attitudes that Cameron, Corbyn and Farage often display towards women.  Clearly Chakrabarti does not fear her son picking up such bad habits or feels the risk of him doing so is worth it, if he benefits from attending a private school.

Dulwich College fees make one’s eyes water.  On one reading, Chakrabarti is paying around £20,000 per year.  The average income of someone in this country is around £27,000 per year and 60% have an income below that figure.

I imagine Chakrabarti would cover a £4,000 increase in her son’s fees by popping into the House of Lords more often for a chin wag with Diane Abbott.

“I gather you were a bit of a fire brand back in the day, Diane, but you were right our children must come first as we storm the bastions of the Establishment. I did, though, have my heart set on Eton, then Oxford for my son. Jacob Rees-Mogg said it had been the making of him …”

When it was suggested that sending children from middle class homes to state schools helps raise standards, Ms Chakrabarti, interviewed on Peston, responded that she “understood” this argument but would not “get into the personal stuff because there is a child in this world who did not chose to be Shami Chakrabarti’s child”.

Yes, I know it is not just Diane Abbott who sent her offspring to private school.  One may easily compile a list of others, starting with, in no particular order, Seumas Milne, Emily Thornberry, Ken Loach, Paul Weller …

Weller said he sent his children to private school to avoid them mingling with the wrong sort at a state school.  He feared his offspring might come home sounding like members of the cast of Eastenders.

Seumas Milne went to Winchester School, another all boys public school and sent his children to private schools.  As an aside, Corbyn went to what was then a private preparatory school, Castle House, before he took his 11 Plus.

Did Corbyn’s parents fear that he would fail to secure a place at Adams?  That their son left grammar school with only two Grade Es at A Level suggests they may well have been right to pay for his preparatory school place as people like themselves still do today.

In order to fund universal free school meals, a policy of questionable value, for people who can afford to pay for them, these real Socialists plan to levy VAT on private education fees.  In the process, they would make it harder for a Diane Abbott of today to buy the leg up that the working class Diane Abbott of yesterday felt she needed to purchase for her own son to get on.

No.  Just a good, old fashioned hearty main meal of hypocrisy combined with a king size side order of snobbery and meanness followed by a dessert of Eton Mess, moulded into the shape of a ladder being pulled up.

Oh, and a maintenance of the class system within our education system and thus within life.  The VAT increase would, of course, reduce the number of children from low income backgrounds, who benefit from private education and then go on to compete with middle and upper class youth for university places and, subsequently, graduate jobs.

One of the Honourables amongst the Corbyn Boys is none other than Andrew Murray.  Murray was a Communist between 1976 and 2016 then he was offered a key position in Labour’s hierarchy by Corbyn, saw the light, disavowed his cherished held beliefs of over 30 years, took the job and joined the Labour Party late in 2016.

Murray was born in 1958 to Peter Drummond-Murray of Mastrick, a stockbroker and banker who was Slains Pursuivant from 1981 to 2009, and Hon. Barbara Mary Hope, daughter of former Conservative MP Arthur Hope, 2nd Baron Rankeillour who was governor of the Madras Presidency of British India from 1940 to 1946.  Murray was educated at Worth School, a Benedictine independent boarding school in Sussex, one of only three such public schools in Great Britain.

Corbyn, as we know, is sincerely concerned about the plight of the unemployed so he naturally found a well paid position within the Labour Party for Laura Catriona Murray, Andrew’s daughter, so she might avoid the indignity of having to formally apply for a job and go through an open recruitment exercise.  Incidentally, Seumas Milne has never seemingly got a job through such a process.  He found the Old Boy Network way more agreeable.

Nepotism and inter-marriage within and between their classes are two ways in which the middle and upper class keep a tight grip on power within our society.  Only days after becoming Labour leader, Corbyn appointed his grammar school educated and Cambridge graduate son, Seb, to a well paid position in the party’s hierarchy.  Seb has never, since graduation, had a job that has not been arranged by his dear old dad, that man of integrity and principled campaigner against discrimination in all its forms, Jeremy Corbyn.  Dad even managed to find a job for John Prescott’s son, David.

Momentum, the Stormtroopers for Corbyn, posted a home video online in the summer of 2017, in a bizarre, sneering attack on people at a garden party, who actually resembled folk just like themselves and those within Jeremy Corbyn’s own circle.

One of the guests, speaking in an affected middle class accent, says, “People think they deserve a job without doing the necessary work to get it. Nobody ever helped me out.”  A caption then goes on to say that this character “got his job at a media agency through his father”, and that the agency had been set up with money from another guest’s father.  Seb Corbyn currently works for John McDonnell.

Jeremy Corbyn and his chums are pukka anti-Establishment rebels, what?

Let us be honest, Chakrabarti is not paying £20,000 a year for private education so her son might attend the local state funded College of Further Education.

Milne sent his children to private school and they went on to Oxbridge.

And that brings us, as it always does in any discussion of the Corbyn Project, to the part funding of free university tuition for mostly white, mostly middle and upper class youth with the continuing misery of those affected by the benefit cap and the benefits freeze.

A lone parent on Income Support, whose benefits have been frozen since April 2015, might reasonably ask why Abbott, in particular, is now more politician than mother.

In pursuing power, Abbott, Corbyn, McDonnell et al have taken Labour well to the right of Blair and Brown on a number of issues, including tax.

Free school meals are the equivalent of a stealth tax rebate for all benefiting from the policy, regardless of income, who do not now qualify for free school meals.

For the many, indeed!

I will leave you to decide.

Is Corbyn a Socialist, taking into account the words of Karl Marx?